On the banks of a lake in New Jersey, two oddballs meet and strike up a friendship. One is Albert Einstein; the other, a vagrant and a drop-out.

To this chance acquaintance, Einstein presents his dilemma.   As a militant pacifist, he knows the terrible consequences of his theoretical works and is afraid that Hitler and the Nazis will make the first atomic bomb. Should he renounce his convictions and warn Roosevelt, so that America wins the race to the lethal weapon? How should he react when the FBI starts to suspect him, a German with leftist sympathies and possibly a traitor?

In this intelligent, serious and sometimes funny drama, Eric-Emmanuel Schmitt imagines the moral conflict of a genius, the reluctant inventor of a device for destroying the world. 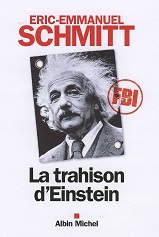