Madam Ming likes to talk about her ten children, who live scattered across China's vast land mass. Is she making it up, in the country of the only child? Has she circumvented the law? Has she gone quietly mad? Could it be that her offspring is a figment of her imagination?
Madam Ming's amazing secret echoes the secrets of China past and China present, enlightened by the timeless wisdom of Confucius. The Ten Children that Madam Ming Never Had is the sixth novella in the series Le Cycle de l'Invisible and follows Oscar and the Lady in Pink, Mr Ibrahim and the Flowers of the Koran, and Noah's Child.

Interview with Isabelle Falconnier for L'Hebdo. 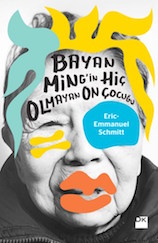