"My name is Saad Saad, which means Hope Hope in Arabic..."Saad wants to leave the chaos of Baghdad for Europe, freedom and a future. But how do you cross borders without a dinar to call your own? How, like Ulysses, do you brave the storms, survive shipwrecks, evade the opium smugglers, turn a deaf ear to the sirens-turned-rock stars, escape the cruelty of a Cyclopean jailer, or tear yourself away from the amorous enchantment of a Sicilian Calypso?By turns violent, slapstick and tragic, Saad's one-way journey begins. From adventures to tribulations interspersed with conversations with a loving father he can't forget, the novel tells of the exodus of one of the millions of men currently in search of a place on earth: a stowaway. Always a captivating and sympathetic story-teller, Eric-Emmanuel Schmitt offers this picaresque saga for our time and questions the human condition. Are borders the bulwark of our identities, or the last bastion of our illusions?

User's guide: set aside some time, open the book and submit to its magic.Eric-Emmanuel Schmitt's new novella, written in simple, beautiful prose, is intelligent and astute with an infallible sense of fictional timing: an absolute treat for the mind. Saad Saad must be one of the most symbolic heroes of the contemporary world, and equally, Schmitt is a philosopher for our time, not a pondering thinker but an active one, capable of placing comedy and tragedy on the scales and making them balance. Here, at last, is the great book of the season. Philippe Vavasseur

"Ulysses from Baghdad" is generous and captivating. With characteristic brio, Eric-Emmanuel Schmitt gives vent to his abhorrence of borders, which, in the name of God, a country or a community, make nonsense of man and his hopes. PHILIPPE CHEVILLEY

France info - « A novel that became a best-seller within days »

Many have been the Iraqis to leave their country in recent years and become reluctant stowaways. Eric-Emmanuel Schmitt's new book, "Ulysses from Baghdad", hinges on just such a character. The novel about his unforgettable odyssey became a best-seller within days.Philippe Vallet

...If critics are suspicious of success and grumble about authors who indulge in a feel-good novel now and then, it is to be hoped they do justice to Ulysses from Baghdad, a philosophical tale with more than a nod at the voyage of Odysseus. The peregrinations of Saad, a young Iraqi student in search of a better homeland, read like an essay on clandestine immigration and the iniquity of borders.

Eric-Emmanuel Schmitt is neither Afghan nor Guinean, of course, nor even Iraqi, like the young hero of his latest novel, Ulysses from Baghdad. But it is these distant countries that are at issue in the author's latest novella which, unless you lampoon every feel-good novel, is quite simply superb.In this odyssey about the tribulations of twenty-first century stowaways, Schmitt, a talented doctor of philosophy, has again proved the breadth of his knowledge and capacities. He uses them to make convincing the potentially banal story of one of the millions of disinherited men and women "born somewhere it would be better not to be", without falling into the trap of portraying a crude struggle between Good and Evil. Ultimately, Schmitt preaches the right of all human beings to control their own lives, over and above the vagaries of birth. The result is a kind of glistening patchwork of dramas played out across the globe: an act of contrition?  MP

A humanistic journey, somewhere between Persepolis, The Arabian Nights ... and of course The Odyssey.

Schmitt treads in Homer's footsteps to tell a tale that could not be more topical. Eric-Emmanuel Schmitt thrives on myth. His plays and fiction are nourished by the basic legends. On the grounds that the theatre is ideally suited to reworkings of the classic myths, he conjured up Don Juan in Don Juan on Trial and Hamlet in Golden Joe. He even tackled the Scriptures, going so far as shamelessly to entitle the volume that encompasses Night of the Olive Groves and The Bible according to Pilate, My Gospels - what else? In his native French, "Schmitt" rhymes with "myth" and he intends to prove it. He is at it again in his new novel, Ulysses from Baghdad.  This time, fearless as ever, he has taken as his model The Odyssey, the first great travel and adventure novel of our culture. After Mozart, Shakespeare, and Diderot, who has long fascinated Schmitt and whom he knows like the back of his hand, he has looked to Homer for his backdrop - like James Joyce, indeed. Who dares wins.  He has plenty of additional strings to his bow, too, like basing his stories on current events, as he did in his "Cycle de l'invisible" a series of novellas that took the world by storm. There are echoes of Monsieur Ibrahim or Oscar and The Lady in Pink in Ulysses from Baghdad: the same stylization, the same concern for simplicity, the same hint of the essay or exemplary story that invites the reader to supply the moral but refrains from dictating one. (...)Schmitt enjoys a tremendous following (and consequently suffers the disparagement of certain intellectuals), precisely because he believes in the constructive function of art and because of his ability to rouse people while remaining accessible to the masses. It is his wide-ranging culture and his obvious talent that enable him to achieve this. Once again, his success is assured.Jacques de Decker

La Provence - « Born again, somewhere else, according to Eric-Emmanuel Schmitt »

All Eric-Emmanuel Schmitt's books explore the idea that life is not absurd but that it remains mysterious. It has a meaning but that meaning is obscure. His novels and plays conclude, too, "that there are dreams that keep us awake" and ultimately, that "the happiness we expect sometimes ruins the happiness we are experiencing". All these themes are to be found in Ulysses from Baghdad, a picaresque saga for our time, as well as an essay on the human condition. The narrator is trying to reach Europe in order to survive the chaos of his country which is at war (...) Funny and moving, Ulysses from Bagdad is a novel of rebirth.

La Croix - « From Scylla to Charybdis »

The saga of Saad is a true Bildungsroman (...). Better still, like a lawyer for the defence, it speaks to all of us and implores us to end the terrible waste that condemns increasing numbers of courageous young men to their deaths."We have a right to ask why borders exist": a hypothesis that Eric-Emmanuel Schmitt has skilfully transformed into a heart-warming novella.

Eric-Emmanuel Schmitt is a chameleon story-teller, a kind of author-actor who slips seamlessly into the skin of his characters - like all good novelists, except that Schmitt performs the trick with exceptional enjoyment and with obvious delight in the constraints and rules. For he is also a man of the theatre. As a playwright, he brought erudition and artistry to summon up Pontius Pilate, an adorable Lady in Pink, and a still-innocent Adolf Hitler. His new book concerns an Iraqi stowaway who, like a barely disguised Ulysses, embarks on a fraught passage from Baghdad to London. Unlike his distant, mythical companion, however, Saad has no intention of returning to Baghdad-Ithaca, the chaotic scene of so much suffering, where, one by one, he watched his people die, under first Saddam Hussein then the American occupation. Eric-Emmanuel Schmitt skilfully interweaves politics and magic to depict a country in distress and joyfully call up ghosts, in this tale of tragedy and fantasy. A magnanimous work that fosters dreams and understanding in equal measure.Fabienne Pascaud 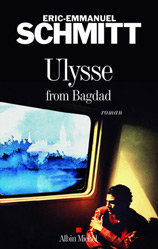