To be or not to be, Golden Joe had never asked himself the question. To have was his sole motto; to own the only thing he worried about. Heir to a financial empire in the City (London), he was brought up in a wild world and a materialistic empire. His only credo : dollars, and his sole "raison d'être" : profits. And yet, the spectral apparition of his dead father in the screen of his computer is going to upset his plans as well as his whole world. It will throw this strong and confident money-maker whose only aim is to make gold, into confusion. As Golden Joe discovers all the criminal schemes plotted by his family, he understands that man is not a robot, that a man can have feelings. He had never thought before that one could love, suffer, laugh or even cry. At last, he understands that there is something rotten in the kingdom of capitalism. Will he get over the long series of tragic revelations ? Will he become at last a real and true human being ? But is it really worth it ?

This is my only pessimistic play – desperate, even, which is not surprising given that it’s about money. The subject dictated the mood. Golden Joe is set in the near future in the City of London where money is made, changes hands and disappears through the veins and arteries of exchange companies. It’s futuristic in the sense that it’s a stylized, polemical analysis of our own time. I looked about me for signs of dehumanization and used what I found as a starting point to invent an exaggerated world of experts, technocrats and golden boys, where profit reigns, money is the only thing of value, relationships are functional, every exchange is governed by interest, utility comes before everything else and the human element is nothing more than a means of communicating which you can learn from management manuals.Joe is the image of success: a calculating strategist whose only concern is to get rich, who is indifferent to all emotion or sentiment and who regards sex as little more than a bit of exercise. Joe is a product of this society, but he has also been formed by his mother, Meg, who has turned him into a robot to spare him the anxiety and guilt that oppress her. But this perfect machine breaks down. The sight of his dead father on computer screens, then the accidental murder of a child undermine Joe and lead him to ‘the world of smells’. Money has no smell, but humans have. Joe first experiences this discovery as an illness, then it goes to his head and he wallows in it. With all the enthusiasm of a new convert (he has just converted to humanity), he goes too far. Having originally interiorized the laws of social negotiation, he now wants to ignore them. He tears himself and everyone around him apart and precipitates his own downfall.Which is where my pessimism comes into play. Joe wants to change the world but he isn’t able to. He tries various policies: charity, humanitarianism, socialism, communism, profit-sharing schemes… Nothing works. Money goes to the rich and produces rich people; you can’t stop its unfair progress. Capitalism, even when it comes under attack, even when it’s sick, survives intact. No idealism, philosophy or machinations can overcome it. You can’t get out of the jungle in which the law of the richest rules. But money doesn’t make you rich. Yet no system or program can halt the fever to make profits and get us out of the political economy.What right did I have to be politically pessimistic, I who am a philosophical optimist? What right had I to show such confusion? To be politically incorrect? None,if you believe the papers that fulminated against Golden Joe with more violence than if I’d kidnapped a baby or raped an old woman. They refused to listen. They threw me a line and invited me to talk on TV programmes, but I was too sensitive and stunned to reply, and anyway I’m not argumentative enough, so I didn’t bother to defend myself. As Beaumarchais said, to offer self-justification is to admit you’re in the wrong. The play had its fans, defenders and supporters. And I’ve got a soft spot for it, the way one loves a child that’s been battered by life. It’s stuffed with references to Hamlet and the structure is based on the Shakespeare (from the apparitions of the father to the final showdown) and is a reworking of some of the characters, because I felt you couldn’t write a play about the human condition of modern man without paying tribute to the Bard’s masterpiece.Dublin, Ireland, 23 January 2000Eric-Emmanuel Schmitt

Golden Joe in Orléans yesterday evening : a vertiginous descent to Hell. Hardly a seat left in the salle Jean-Louis Barrault at the Cado theatre for the opening night of Golden Joe, a play by E.E.Schmitt. The house was enthusiastic and gave the play and the actors a real ovation. Twelve actors in a two-hour play. Among them, of course, Robin Renucci who plays the leading part of Golden Joe, as flamboyantly cold as feverishly invulnerable. Wonderful Francine Bergé, In a powerful and lyrical duet : a mother facing her son. Petulance, grace, lightness, emotion and poetry are brought to the play by Sandrine Dumas as Cecily, the "little sparrow", Joe's fiancée.

Money isn't everything. Eric-Emmanuel Schmitt, author of The Visitor, has done it again. Harsh and rough. To have or not to have? The question is one Golden Joe has never asked himself, for 'to have' has always been his raison dêtre.Between speculation on the rupee and increased shares on peanuts, Joe lives a gilded life, hardly sleeping so as not to lose a moment that could be used to make money. But this superb machine breaks down when his father's ghost appears on the television one night. Parallels with Hamlet are obvious throughout the play. 'Golden Joe discovers the objective wretchedness of the poor and the subjective wretchedness of the human soul,' Schmitt explains. Emotions ' what Joe called 'the human element' - start filling his days; he is confronted by the human condition.If money has no smell, to smell means that you've already escaped its grasp. Joe experiences his initiation into the world of smells like a second birth. Suddenly, he can smell, and odours and fragrances tell him much about the world. Gérard Vergez's limpid production (he also produced The Visitor), highlights Schmitt's ideas. The auditorium is filled with a range of fragrances: a banker's cigar, burning banknotes, London's fog. Golden Joe is a play of multiple strengths: you start by thinking that it is a retrospective vision of the 1980s, then a character lets drop that there are 33 billion people in the world and that Golden Joe is not a golden boy; money doesn't rule the world, it is the world. We are in a time when money is everything, money is violent and bankruptcy can strike you down with more potency than a heart attack. A further strength is that this is not a moral story, and Joe does more harm in his charitable phase than when he was avaricious, for crimes committed for money cannot be redeemed and when he wants to sink the system, Joe is still serving mammon. Finally, the Shakespearean structure is sound, although one of Meg's monologues is unnecessary and Schmitt allows himself one too many digressions. Schmitt, who will be 35 next month, has come up with something quite different from his brilliant study The Visitor, producing a powerful and very bitter play.So far, he's tackled Don Juan, Freud's relationship with God and now Hamlet; one wonders what myth he will turn his hand to next.

For all he hates propaganda plays and has little time for moralizers, Schmitt is not slow to denounce the disappointments of our age, which are also those of Joe and his contemporaries. For Schmitt, the stage is the place to represent the human condition. He knows how to entertain. His plays and novels are a delight and he himself fascinating on the subject of his ambition and his art. Like Diderot from whom he has learnt so much, he is kind, gentle, easy-going and a philosopher. A writer without equal.

Schmitt Dares Again !Not for Schmitt the current trend of humble settings and ordinary folk: Eric-Emmanuel Schmitt aims high. In his first play, Don Juan strutted his stuff; then came The Visitor, which brought God on stage discussing Evil with Sigmund Freud in post-Anschluss Vienna.The hero of his first novel, The Sect of the Egoists, was a visionary philosopher, so convinced that everything was mere sensation and each man the creator of the world, that he took himself for God. Schmitt, 34, appears to be the new philosopher of the stage, manipulating ideas with the skill of a specialist and a touch as light as the best rhetorician.His characters are apparently all obsessed by the same question, namely, how to exist in the world? God is clearly not far off in their sky. 'I doubt in God' Schmitt says, calmly and not without humour, the sign of a cultivated mind. If Golden Joe starts to think about the world and thus precipitates his downfall, it is because he is 'naively serious' and unable to love. 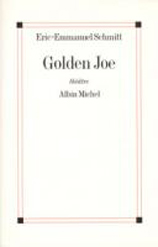