This one-act play was first performed for the project 'Théâtre contre l'oubli' ('Theatre against neglect') on the 9th December 1996 at the Odéon, Théâtre de l'Europe, starring Francis Huster. It is available from Albin Michel publishers, Volume I of Eric-Emmanuel Schmitt's Théâtre(1999).

The Devil has just been diagnosed as suffering from depression. Satan's complaint is that Evil has been completely normalised and the twentieth century has lost interest in him. His henchmen are concerned and look for a way of cheering him up. A play on the theme of Evil that acts like a tonic.

It is available from Albin Michel publishers, Volume I of Eric-Emmanuel Schmitt's Théâtre(1999).

We live on life day in, day out and it's all too easy to lose a taste for it. 'For a long time, I lived without realising I was living,' says the character of this monologue, in the course of telling his life story to an imaginary listener. The Gag is about a man with an incurable disease - a disease with a stigma attached to it, as though love and its consequences, albeit tragic, can be stigamtised. The man's life becomes precious because he perceives that it will end. Faced with the incomprehension of family and friends, he seeks refuge in the woods…

One Thousand And One Day

A cry from the heart and a cry from the body. The body belongs to François who is lying in hospital in a coma unable to feel anything. His wife, Suzanne, sits by this body each day and tells it what is happening in the world without knowing if François can hear. Her visits last a mere ten minutes, but these ten minutes are an essential source of hope and life and enough to tell a simple love story. 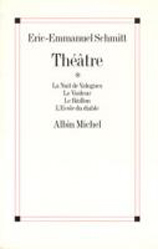