When I Was A Work Of Art

Who has never dreamed of becoming an object? Or even, an object of admiration? Such is the pact that binds an eccentric artist to a young man on the edge of despair. The artist, hungering after scandal, offers to turn the young man, who is hungering after life, into a work of art. After all, there is nothing to lose... except one's freedom."

This is the successful outcome to a risky gamble. Eric-Emmanuel Schmitt has written a remarkable thriller with a spine-chilling plot that's a tad repulsive, too. You shouldn't be put off, however: starting with the narrator's suicide attempt in the opening pages, the story is compelling from beginning to end.(...) With elegance and cunning, Schmitt mischievously depicts the current disease: the race to fame. The lesson and moral he draws leave the reader feeling both perplexed and satisfied. Christine Arnothy

You can always be sure of surprises with Eric-Emmanuel Schmitt, an author who delights in giving free rein to his fertile imagination and who clearly gets a kick out of thinking up crazy stories and writing novels. (...) All you need do is sit back and go along with the author's hair-raising ideas. The pay-off is considerable: right to the epilogue, you'll be rewarded with one dramatic reversal after another. When I was a Work of Art should really be a film; however, the prose makes it a thoroughly visual experience. For Schmitt has total control over his gothic novel, embellishing it with a hint of satire on contemporary manners, here tarted up and subjected to the temptation of money. An original love story acts like a breath of fresh air in what is otherwise a pitiless fable. The social commentary is excellent, too. (...) What more could you ask from this raving novelist? The book is guaranteed to transport you out of the daily grind for a few hours, as is surely the role of good literature. Thankfully, Schmitt refrains from indulging in the sordid language too often favoured in racy novels, using instead a pleasant and universally accessible style. You won't regret getting involved with his colourful characters. Schmitt takes his place in the gallery of inventors.Eric Ollivier

Pacts with the devil have long fascinated writers: give me your soul and I will grant you your heart's desire - glory, love or eternal life. Poets and novelists have been tormented by the Faust myth since well before Goethe or Lenau, and there are still talented authors around who can breathe fresh life into the legend. Eric-Emmanuel Schmitt has always played on the formative myths. In both his plays and his novels, he moulds, dissects and reconstructs them, then presents them to his contemporaries, like a series of only faintly distorting mirrors, where viewers can see, to their horror, reflections of demons they thought long gone. (...) Schmitt has now produced a moral tale, unhinging and entertaining in equal measure. It offers a thought-provoking and welcome commentary on the status of the work of art, the nature of life and the inordinate power of rights, but also on the ridiculous way society has elevated fame, youth and beauty to the level of universal values. Desperately lucid.François Busnel

Le Républicain Lorrain - « When I Was A Work Of Art »

Valeurs Actuelles - « When I Was A Work Of Art »

Notes Bibliographiques - « When I Was A Work Of Art »

( ...) A philosophical tale with a merciless and sometimes hilarious logic.  Jacques de Decker 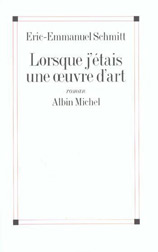