Diderot Or The Philosophy Of Seduction

Denis Diderot conceived of a new approach to philosophy based on freedom, libertinage, pleasure, freedom and lucidity. Eric-Emmanuel Schmitt now sheds new light on this philosopher previously recognised as a materialist, a positivist and a scientific thinker.

Diderot is presented as a problematic, uncertain figure, tempted by both light and shade, the rational and the irrational. He was the only eighteenth-century philosopher to pay such attention to nights and dreams, madness, enthusiasm, ecstasy and man's genius.

All the contradictions and dilemmas of the human mind fascinated him. For him, truth was an inaccessible ideal, but it was the thinker's duty to think this inacessibility. Schmitt's Diderot sounds more like the Sphinx than Oedipus: few answers and a lot of questions. Diderot clearly offered a new philosophy as well as a new way of understanding it.

Far from convictions, he stuck to paradoxes. "In the morning, I see probability on my right, and in the afternoon, it is on my left!" Schmitt shows us a Diderot who flirted with all sorts of theories the way he flirted with women; he was seduced by them, and it is the amatory aspect of Diderot's philosophy that Schmitt evokes here.

Eric-Emmanuel Schmitt - « Whimsical and fair-minded: these are... »

Whimsical and fair-minded: these are probably the two qualities for which Diderot is so dear to my heart. He has always had a lot to offer and he continues to do so. He teaches us things that can't be taught: freedom, effrontery, lightness, contradiction and boldness. Anyone stupid or humourless would find his company unbearable. Maybe that's why I always carry him with me. Anyway, he shows you the way without being intrusive.

He can't generate disciples, only rakes, because you'll only learn bad manners from him. I don't always agree with him. Neither does he with myself. Some philosophers like Kant, and especially Pascal, are more intimately bound to me. They answer my questions more fully and our paths meet more often, but along with Lucretius and Montaigne, Diderot belongs to that wild and marginal bunch I like so much and whom I call 'the Knights of Doubt'. And yet, for me, he is, together with Pascal, unquestionably the best of our thinkers who were both philosophers and writers.

Diderot is not like Rousseau the autodidact, far from it; he never makes any effort. He's not like Voltaire either, cutting short his thoughts with his sentences. On the contrary, he lives, he looks everywhere, he destroys any kind of rhetoric to fit his moods. He continually quivers in the twist of his sentences.

He remains an unattainable model. As a writer, he is my model.

Le Monde - « Diderot Or The Philosophy Of Seduction »

The joys of doubt.

You can't rely on anything nowadays. Time and again the cry goes up, as though it's necessarily a cause for concern. But why see doubt as synonymous with distress? Take a look at Diderot, an example of happy uncertainty. Avoid change; distrust randomness; steer clear of fluctuations; guard against the insidious fear of the unexpected and the upset of unpredictability; go for stability, solidity, the land of certainty; go for things that last. That's what you hear all the time. Science, politics, religion and philosophy have all used this kind of vocabulary down the ages. Better to go for established truths and untarnishable ideas. Same old story, but today it's enjoying a comeback as never before. It's obvious, we're told, the chief ill of modern man is his inability to rely on anything any more; everything's in a constant state of flux. There follows a dim sense of panic. All sorts of cures are on offer for the various manifestations of Doubt: encyclopedias, new religions, neo-fascisms.

The best antidote to this festival of fear is Diderot. He belongs to the happy few who champion Doubt. Few indeed are the thinkers content to see hard and fast truths eclipsed. It's hard to name a philosopher who gladly accepts that nothing is ever sure and everything constantly shifting. The only ones who might be said to have enjoyed propounding the permanent instability of things were Heraclitus, Montaigne and Nietzsche. Great minds, to be sure, but so often buried under the dogmatisms and systems constructed around them that they end up seeming insubstantial and fragile. All the more reason to remember Diderot, a great man with no true disciples, who continues to have as few today as he chose to have during his lifetime, for all he had so many friends. 'Voltairean' and 'Rousseauist' are terms frequently used to denote affiliation or analogy, but whoever heard of 'Diderotian'?

The word exists but is rarely used, for Diderot's adherents are few. Eric-Emmanuel Schmitt belongs to this minority. His Diderot is a skilful and clever work, and the breadth of his knowledge of the texts and tenets of the time is impressive, from La Morlière's fatalism to eighteenth-century debates about the freshwater polyp - La Tremblay's work triggered the question, animal or vegetable? Nothing seems to escape the scope of Schmitt's learning; Abbé Pluche's Spectacle de la Nature, Languenhaert's theories and Needham's work on spontaneous generation all seem as familiar to him as innumerable other references that feature along the meandering path Diderot trod.

But the real merit of this attractive book lies elsewhere. Schmitt's clear, stylish prose brings to light the shifting nature of Diderot's thoughts and the frolicsome twists and turns of his intellectual trajectory. No systems are revealed here because Diderot didn't create any. Rather, Schmitt highlights the transition from one thought to the next and shows the delights of being an intellectual butterfly that flits from idea to idea and rejoices in Doubt. This comes as a surprise: doubtful, Diderot? He who notoriously saw off metaphysicians who made their money from obfuscation? Didn't he consider theologians to be the friends of darkness, God a useless word and disbelief the first step to philosophy? It surely wasn't oversight or accident that made him espouse materialism and voluntarily extol Baron Holbach.

The novelty of Schmitt's work lies in showing Diderot's awareness that materialism is only a belief and not a certainty. The philosopher finds that the hypotheses he prefers in fact have no grounds, hence his distaste for Helvetius' dogmatic self-confidence. Diderot started out convinced of the truths of sensualism but he ended up mistrusting his own convictions, growing increasingly aware of the limits of all knowledge. Yet he never dwells on the pathos of doubt or laments the tragedy of the ephemeral, finding, on the contrary, an endless source of joy in lack of certainty. The intellectual quest becomes libertinage, erotic, a fount of endless meetings, discoveries, inconstancies, diversity and surprise. This was the man who declared, "my thoughts are my whores". Scepticism didn't make his head spin, nor doubt get him down.

The only certainty after which he hankered was the certainty of pleasure, otherwise he loudly proclaimed the virtues of all things temporary and welcomed everything precarious with open arms. Gone was the hunt for truth. Diderot knew that from this sort of jaunt you come back empty-handed, so he contented himself with just going part-way along the path of every fine idea he came across, flirting with concepts and delighting in novelty after novelty. Now that the truth he sought had proved itself to be nonexistent or unattainable, a limitless panolply of shifts and adventures opened up before him. With the dashing of great expectations came the birth of a host of charming forces.

This is not just an old story that belonged to the Age of Enlightenment and vanished with it, serving only to feed the dreams of researchers. We might learn a lot from Diderot's optimism, we who live in such uncertain times. If we stopped believing that the loss of stability was necessarily worrying and the disappearance of the Grand Truths a disaster, perhaps we might find reasons to be glad. Of course, this is not to say that all doubt is good; it would be taboo to preach the joys of uncertainty when so many people cannot be sure when they will next eat, where they are going to sleep or whether they can hold on to their job. Doubt can give rise to pleasure only in the fields of knowledge and learning, which is nevertheless a vast and mighty stronghold.

Instead of despairing at the crumbling of culture, bewailing the loss of faith and taking fright at the sight of disparate sciences abandoning the struggle to fit together, instead of groaning at the rapid advance of technology and gradual retreat of nature, why not enjoy the infinite pleasures of so diverse a world? You might object that it is too easy and ultimately too frustrating to go endlessly from one idea to another, or say that we can't stay forever in the superficial glitter of a glossy world. But these are arguments that have been anticipated and accounted for: "One must often give wisdom the appearance of madness," wrote Diderot to Sophie Volland, "in order to get it accepted." 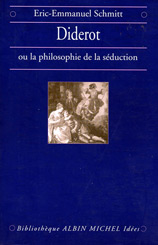