The sect of the Egoists

Not available in english for the moment.

Is life all a dream? Are the clouds, birds and other men nothing but our own visions? Could it be that we ourselves are God? Gaspard Languenhaert, an eccentric eighteenth-century philosopher expounded his principle of 'selfishness' in the Paris salons and even founded a school in Montmartre. Here he taught his disciples that the world was nothing but the product of their own fantasies and that they were the only reality.

Two centuries later, a researcher chances upon Languenhaert and is so intrigued that he abandons his earlier work to follow this suspiciously elusive trail. His research takes him from Paris to Amsterdam, but above all it leads him to the depths of his own consciousness and the limits of rational experience where the mind reels nightmarishly on the brink of insanity.

Who better to tackle a story of logic turned upside down than Eric-Emmanuel Schmitt, winner of two Molières for his latest play The Visitor currently being performed all over the world? From this bold and talented playwright now comes a beautifully told novel of astonishing modernity.

For years I was afraid of writing a first novel. I did not know how to handle the freedom it offered me; I was afraid it might lead to anarchy. I had trouble finding my 'commandments'. Every page was destroyed by doubt. Why reduce a description to one line? Why not a paragraph? A page… ten pages? How would I control the flow of ink?

The great thing about theatre is that it imposes the strictest discipline: the limits of a play are determined by the length of the performance; the scenes are organized according to the logic of the situations; spoken dialogue leaves you free to write but also stops you writing too much; fear of boring the audience makes you cut the text; the total absence of the world and nature and the pointlessness of describing them make you focus on the human element, and finally, the need to give every player a perfect score makes you sharpen your text. A playwright is like a musician composing a quartet: chamber music calls for clear thoughts, a rigorous structure and definitely no narcissism.

Despite all these difficulties, I never dreamt of privileging theatre over novels.
Circumstance alone decided my fate - the stage established my reputation so quickly that for a few years it took all my energies. Added to which, today's over-concern with the novel as a genre irritated me, and out of sheer provocation I made a point of defining myself exclusively as a playwright.

How many times was I asked: "You're a real writer, you deserve better than drama! When are you going to write a novel?" I used to reply in annoyance that we were witnessing a reversal of values and that for centuries, from Corneille to Victor Hugo, drama had been thought the only worthwhile form of literature. Don't forget Balzac saw his career as a writer as a failure because his works had not been staged. People would politely let me rant and wait for me to calm down.

However, I'm not going over to novel-writing in answer to general pressure. I'm responding to a personal need: some of my ideas need to be developed in novels while others are better worked out in plays.

The Sect of Egoists is undoubtedly a philosophical novel. But as a philosophical novel it's paradoxical because it deals with philosophical madness not philosophical wisdom. All of us at some time or other have experienced that lurking sense of doubt about reality being real. We have vivid and colourful adventures every night and when we wake up in the morning, we know they were only illusions. Sometimes in our waking moments, we drift into pleasant uncertainty and start to wonder whether the world we live in is real or not.

When I was about twenty, I often used to confuse the life I was dreaming with the life I was living, a most embarrassing situation, and reading Descartes, Leibniz and especially Berkley was no help. Solipsism, which I first perceived as a feeling and which I came to see as a thought, seemed to me unavoidable. It is the doctrine according to which the world, in dreams or waking life, is merely a collection of subjective sensations with nothing to prove to me that it is material. The stuff it is made of is pure thought. If the world exists, it is in me and by me.

All the great philosophers who studied consciousness, from Descartes to Husserl, went through a solipstic period at some point. All of them left it behind and returned to the real world. Solipsism in the history of philosophy is merely a stage that's soon dismissed, a mistake. Officially, there are no solipsistic philosophers. However, in the course of my reading and research on the eighteenth century, I came across a firebrand, an eccentric thinker we know almost nothing about beyond his name, Gaspard Languenhaert.

He seriously maintained that the world only existed in his mind. Ergo, he had created it. To make matters worse, he wanted to found his own school, to convert people, to have disciples even though the philosophy he was teaching was probably the only one that doesn't call for disciples, because other people don't exist. He died at the age of 33 from an overdose of opium. I knew the little that two or three scholars had discovered about him, so I could give my imagination free rein, and I used what the novel and the novel alone allows, that is, a plethora of 'I's' to the point of confusion.

Where a novel can score over a play is in its presentation of, not an action, but a point of view about an action, or even several points of view. The novel as a genre is the voice of subjectivity and it gave me the tools to treat the theme of a fevered mind, something that would have been impossible on stage.

The reactions to the book when it was published were extremely positive. Some people thought it ought to have spurred me on to write another novel straight away… which was exactly what I did. This novel was L'Evangile selon Pilate (The Gospel According to Pilate). But it took me eight years.

Madness is as familiar as wisdom, and if the distinction between the two were as clear, we would not have been arguing about philosophy for 25 centuries. Is Gaspard Languenhaert, the hero of The Sect of the Egoists, mad? Languenhaert, an early 18th-century drawing-room philosopher, claims that only he exists and that everyone and everything else is nothing but a creation of his own mind. In short, he is God and life a divine dream - his own, of course.

Eric-Emmanuel Schmitt imagines the wealthy, womanizing Languenhaert founding a sect, although it is destined to be short-lived since forcing gods, who believe their peers to be illusions, to co-habit is no easy task. We have entered the bracing waters of paradox.

Languenhaert is clearly an enlightened seducer, an eccentric and colourful character. Schmitt invents subtle and mischievous dialogues and fragments of memoirs, in a wonderful pastiche of the Enlightenment and Romanticism; the extracts are sly, brilliant, profound, and, when appropriate, moving, with just enough mystery and dramatic reversals to bring this intellectual game to life.

Is this a brilliant fantasy? Of course, but it would soon be forgotten if Schmitt had not succeeded in resurrecting an old doubt, a lingering suspicion that haunts us all: what if Languenhaert were right? Suppose proof, as often happens, were all a sham, and we do in fact invent everything, the way Schmitt invents his hero, and the way our reading makes him exist?

Telerama - « The Sect of the Egoists » 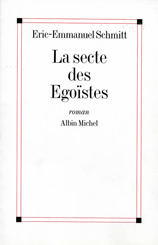