Frederick Or The Crime Boulevard

Paris is fascinated by Frederick, a larger-than-life, popular actor, an eccentric, a seducer and a revolutionary for whom nothing is too much. He seems ready for anything except love. On the stage, he is the embodiment of passionate love, whereas behind the scenes he has to buy ready-made love. When he meets Bérénice, a young and mysterious woman with no connection with the stage, he faces a crucial dilemna: love as an illusion or love as reality? The stage or real life?

A god in the Gods.Frédérick Lemaà®tre, the figurehead of Victor Hugo's melodramas, sometimes dubbed 'the god in the gods', seems an obvious choice for the hero of a play. But it's a bold card to play, given that a masterpiece about him already exists in Jacques Prévert's famous film Les Enfants du Paradis. Nothing daunted, Eric-Emmanuel Schmitt has followed in Prévert's footsteps, and his play Frederick Or The Crime Boulevard has been on at the Théâtre Marigny, with Jean-Paul Belmondo in the lead role under the direction of Bernard Murat, since September 22. Carné and Prévert's 1940's revival of the faraway glory days of melodrama was largely a tribute to the spirit of gloomy Romanticism of that period. Schmitt evokes this same spirit, but, since the stage is a restricted space (although he makes masterful use of it, alternating conversation pieces with spectacular sequences and dreamlike moments), he uses it to reveal to the public the psychology of an actor - a narcissistic monster, constantly unfaithful in love and more of an observer than an actor when it comes to passion.Frederick is constructed like a late 19th-century play that belongs to a theatre of the past with constant dramatic turns that were mostly created in the theatre. For instance, Frederick himself corrected the terrible play he was to act in, l'Auberge des Adrets, in order to give the whole production more scope and a funny and challenging flavour. Schmitt does the same, reversing situations to give them the sparkle of comedy, letting emotions develop underneath. It is dazzingly witty: - "Let us hope that this triumph will become a success"; - The author of the Auberge des Adrets: "I particularly enjoyed your silent moments"; Frédérick: "Please do. I wrote them!".One also thinks of Cyrano, especially at the end when Frederick, near to death, has one last meeting with the woman he loved so dearly after so many years of unconsumated and secret passion. Schmitt does not invent, but he unveils long forgotten secrets.

The richness of the show, its unparallelled cast performing with such élan, the realism of the scenery, the beauty of the costumes and the endless climaxes of a plot laced with so many witticisms, make this production an unforgettable occasion (...)We preferred the second part for its comments on the theatre and for two memorable intimate and moving scenes.

Schmitt's play Frederick is undoubtedly the most cunning play we have seen in a long while. Even if the tragic end seems an indulgence that sits heavily in the play, the overall result is a genuine admixture of happiness and tenderness together with a finely woven love-story involving an attractive heroine played with much finesse by Florence Darel.Above all, the play exudes a nostagia for the lives of popular actors and the frenetic spirit of theatre companies where members act off stage as well as on it, continually cheating, exaggerating, putting on a show, acting and overacting their lives, for life is so much more entertaining when you perform it, even when it is real, even when it is sad. Schmitt has put his finger on a peculiarly French and peculiarly Parisian characteristic. Everything you might want to learn about the art of dialogue is here.

Elegant, coarse, tender and wild: these are the words Théophile Gautier chose to describe Frédérick Lemaà®tre. Frederick is back, and once again he is the king of the Parisian stage. Belmondo gets right into the part and portrays this legendary figure with obvious delight. He plunges straight ahead into the clichés of melodrama, here and there introducing the practical jokes and quips Frederick had himself devised to improve the quality of the Auberge des Adrets. But, beyond these moments of farce, Schmitt's play is also a meditation on the theatre and on the life of an actor. Little by little, Belmondo's acting is reduced to the essentials, and the secret wounds of a man condemned to success and loneliness are revealed. The cast, the scenery, the setting, which recalls the theatrical pomp of a past era, the enthusiasm, the shrewdness, the emotional experience of watching a popular play (in the noblest sense of the word), everything is perfect: a sheer celebration of the stage as a world of entertainment.

Politis - « Frederick Or The Crime Boulevard »

Schmitt evokes the great clashes between theatre, love and the monarchy with contagious panache. A rich cake laced with Bourbon...

L'Express - « Frederick Or The Crime Boulevard »

Eric-Emmanuel Schmitt clearly wrote his latest play Frederick with Belmondo in mind for the title role, so it is no surprise to find Belmondo so completely at ease, so natural and therefore, so charming. But Schmitt certainly never had him in mind when the idea for the comedy first occurred to him. For the main character of the play is not Frederick at all, contrary to our expectations, but theatre itself. Lemaitre is only a pretext, a foil that enables Schmitt to plunge into a fascinating and passionate reflection on the theatre and its actors. Schmitt has always been obsessed with the subject and it is this that makes him so alluring: his love of the stage. A close look reveals that his play is built around the penultimate tableau, when, after nearly three hours, Belmondo is solliloquizing on the miserable human condition of actors: "We are not men but only actors aping men!" This is the theme that interests Schmitt, and he movingly makes the point, although Belmondo sounds less convincing when playing scenes of intimate confession than when playing scenes of action. But for his message to be conveyed, the author needed a larger-than-life hero, a thundering messenger, in a word, a real character. So why not Frédérick Lemaà®tre, the ideal histrionic actor? It is doubtful whether Schmitt's fiction corresponds to the true facts. He has taken enormous liberties with his central character, who surely cannot have asked himself so many questions about actors and their fate. But that does not matter in the least. It is easy to forgive Schmitt for spiriting us so generously and so youthfully into the wings of the Boulevard du Crime where actors, those unfinished adults, once improvised a rough but heady stagecraft, infusing it with their own passions, for better or for worse. 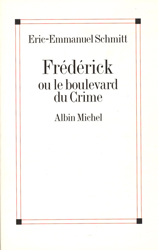