Which came first, the chicken or the egg? Why can’t a cow act like a butterfly? Where do I go when I sleep?
Discover, in the adventures of 1st Chick, how the existential doubts and questions of a chick can cause mayhem in the chicken run.
Eric-Emmanuel Schmitt, a thoroughly modern story-teller, has teamed up with the talented Belgian illustrator, Janry, to produce his first graphic novel.
A delectable animal fable with expressive, uncompromising drawings divided into sketches a few pages long.

Available in the bookshops from 6 September.

Insufferable Chick! Barely out of his shell, his beak burns with existential questions: “Which came first, the chicken or the egg?” “Where do I go when I’m asleep?” “To be or not to be?” Within the confines of the farmyard, he pesters the chickens, turkeys, ducks and foxes and drives them crazy with his questions. A prolific author of highly acclaimed novels and plays, Eric-Emmanuel Schmitt turns his talents for the first time to the graphic novel. Megalomaniac, a tad vulgar but always funny, the insufferable fowl raises Schmitt’s favourite themes the way a child might approach them, with maddening but astonishing pertinence. The metaphysical meditations of this young feathered hero are illustrated by Janry, renowned for his drawings of “Petit Spirou”, and who here gives full reign to his hair-raising imagination. A graphic novel to delight young and old

L’immanquable – Eric-Emmanuel Schmitt’s début in the 9th art – an event we awaited with bated breath.

With the invention of the character Chick I for “Petit Spirou” illustrator Janry, Schmitt probes the world around him (…) a thoroughly worthwhile exercise.

Le Progès – Janry’s expressive, truculent graphics are ideally suited to this modern-day fable, which celebrates the entry of one of literature’s leading lights into the theatre of the graphic novel.

Casemate – An old hand at illustrating graphic novels, Janry has now animated a chick in a hilarious philosophical fable concocted by the writer, Eric-Emmanuel Schmitt.

Boursorama.com – In a humorous take on the great philosophical questions, Eric-Emmanuel Schmitt turns his story-telling talents to the graphic novel and holds up the fabulist’s mirror (…).

Direct Matin – With illustrations by Janry and a good dose of humour, the book recounts the existential doubts of a philosophical chick.

Le Figaro – Philosopher, novelist and playwright Eric-Emmanuel Schmitt never ceases to add to his projects (…). His first graphic novel is set to appear at the end of August with the title, “The Adventures of Chick I”. Chick I ponders the world in a series of sketches.

Agence France Presse Mondiales – Courrier des Bulles – Naïve and learned by turns, the hero of “The Adventures of Chick I” questions the world in sketches dreamt up by the writer Eric-Emmanuel Schmitt. The existential doubts and questions of this delightful philosophical chick will be available from 6 September.

Version Femina – Fans of Eric-Emmanuel Schmitt will be in raptures (…) over “The Adventures of Chick I”, on sale from 6 September. Unbelievable!

Actuabd.com – The unusual pairing of an acclaimed author and playwright, Eric-Emmanuel Schmitt, and an outstanding Belgian illustrator of graphic novels, co-creator of “Petit Spirou”, Janry… The result is compelling. 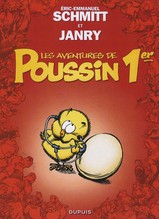