In 1957, the screen- and scriptwriter Jean Bernard-Luc wrote a play called Hibernatus. It was put on at the Théâtre de l’Athénée in Paris and became an outright box-office success. In 1969, the director Edouard Molinaro decided to adapt the play for the screen with Louis de Funès in the lead role; like the play, the film was a sell-out.

The story takes place in 1970. A man has been frozen in the ice of the North Pole for 65 years and is found miraculously alive by a Franco-Danish polar expedition. After investigations, it turns out that the young man is 25-year-old Paul Fournier, an explorer who had set out in 1905 and who has been perfectly preserved. He is gradually brought back to life by Professor Loriebat, a world expert in artificial hibernation…

The film continues to enjoy iconic status in France and many people see it as the gold standard among movies. At the Théâtre de la Michodière from 10 January 2015, Jean-Luc Reichmann and Ingrid Chauvin directed by Eric-Emmanuel Schmitt (deserting his Théâtre Rive Gauche for the occasion) are poised to revisit the past in an adaptation that cannot fail to attract a huge and appreciative audience.

A play written by Jean Bernard-Luc, adapted by Eric-Emmanuel Schmitt and produced by Steve Suissa 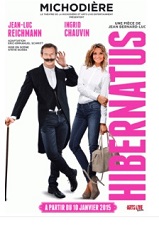